The Maryland Gold Star Mothers Chapter was formed in the 1940s, to support families of those in the military during WW II, Korea, and Vietnam Wars. Maryland and Delaware then combined to work with those who were grieving.  Over the years, membership dwindled and the Chapter became inactive.  With the United States’ involvement in the Global War on Terror, along with the dangers of regular military life, there has been a rise in the number of Gold Star Mothers in our states.

In 2007, a group of Gold Star Moms, spearheaded by Carol Roddy, whose son was killed in 2006, banded together to ask the American Gold Star Mothers (ASGM) National Office to grant us a charter to start a new chapter here in Maryland.  Carol, with her husband Bob, provided leadership for the next few years, getting the chapter set up and incorporated, contacting potential members and acquiring 501(c)(3) status for the chapter. She served as President until her untimely passing in 2013. 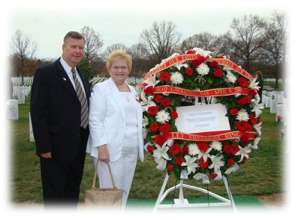 Our mission is finding strength in the fellowship of other Gold Star Mothers who strive to keep the memory of our sons and daughters alive by working to help veterans, those currently serving in the military, their families and our community.  As members of the National American Gold Star Mothers, Inc organization a 501 (c) 3 national nonprofit Veterans Service Organization, we are governed by our national organization’s constitution and bylaws; however, much of the service of our organization is done at the chapter level. The Gold Star Mothers Maryland Chapter is a non-profit 501 (c) 3 tax exempt organization.

Our members volunteer many hours at the VA medical centers, Walter Reed National Military Medical Center Bethesda (WRNMMC), the USO, and several other veterans service and community organizations.  Our Chapter frequently partners with other organizations that support our veterans and active duty service members and their families.  We also actively participate as guests and speakers in many patriotic events in our communities throughout the year.  In all of these activities, we heal together while helping others.

Financial gifts from individuals and organizations to our Chapter are welcomed and are used to continue these activities to help defray the costs of running our small organization.  Our major fundraising event is our annual Crab Feast and Bull Roast, usually held in September.  Watch this site for more information or visit our Facebook page.

For more information about donating to the Maryland Chapter of the Gold Star Mothers of America, please check our Donations page.

Why do Gold Star Mothers Wear White?
White is a Strong Statement of how the Founders and mothers want to be perceived, as we participate in the organization’s business. Yes, we mourn the loss of our children, but WHITE MAKES A SYMBOLIC STATEMENT OF PEACE, SACRIFICE, INNOCENCE AND GOODNESS. These were the values our children held dear and for which they died. Wearing White CELEBRATES OUR CHILDREN’S CONTRIBUTIONS WHILE THE GOLD STAR ACKNOWLEDGES THEIR SACRIFICE.

White symbolizes peace, the one thing that Gold Star Mothers of every generation have prayed for, and white reflects both the sacrifices of their children and the grace, purity and innocence of those who have died so young to create a world of freedom.